The Economy of Ideas

The growing importance of protecting intellectual property rights in Pakistan

History has not been very kind to Elisha Gray. As one of the most prolific American inventors of the 19th Century, Gray was a key supplier to the global telegraphy company, Western Union. In fact, he created the harmonic telegraph from scratch and his work lead him to develop the design for what we now know as the telephone. Yet, the world unduly celebrates Scottish scientist Alexander Graham Bell – and not Gray – as its inventor. In reality, the former simply struck while the iron was hot and secured a patent of the machine before the latter, and so cemented his legacy.

Interestingly, both Gray and Bell actually filed for the patent on the same day. And although the incident dates back to 1876, it serves as an ideal example of the ramifications of registering Intellectual Property (IP) as people generally lack the knowledge and resources to safeguard their ideas. “We do not realise that IP is just like real estate,” explains Nadia Shah, Deputy Director of Law at the Intellectual Property Organisation of Pakistan (IPO). “One can license their IP out to earn money off of it, just as they can rent out their property.”

In Pakistan, most of us are aware that IP as a whole covers anything that might be a manifestation of our mind – from inventions to music or art. Where we falter is recognising the economic aspect of it. To make things clearer, barrister Shoaib Razzaq, who specialises in IP infringement, explains the concept in layman’s terms. “The creator of an IP should be able to enjoy revenues from its creation,” he says. “Just like how the McDonald’s headquarters in the US makes money off its franchises in Pakistan.”

No trespassing: Protecting your IP

Established back in 2005, IPO has been dealing with matters related to intellectual property tirelessly. “We are an autonomous body like the Competition Commission of Pakistan which acts as a registration authority,” shares Shah. “Alongside this, we undertake other functions such a boosting awareness.”

As of the year 2012, the IPO act places the three registries of patents, trademarks and copyrights under one major operational umbrella, in order to improve coordination. Prior to this, the three different registries were linked to three different ministries. The process to register one’s IP is relatively simple although it may take up to three years for the application to be accepted. “You must fill a particular form, depending on the type of IP, and then submit two copies of the form along with drawings and designs,” says barrister Razzaq. “After this, you receive a receipt of acknowledgement which leads to an examination process wherein objections might be raised. If that happens, a hearing takes place so that the registrar can determine whether the objection holds any merit or not.”

According to Nadia, the lengthy processing time is at par with international standards and nothing extraordinary in the world of IP. “Patents offer 20 years of protection for the disclosure of information,” she says. “Not every patent is commercialised from the first day. The long wait also helps industry linkage as oftentimes, there are multiple patent claims of a similar nature. The inventor can gauge how much novelty their invention has.” Barrister Razzaq lends credence to Shah’s claim, highlighting cases that have been pending since 2011. “There are very few offices here that deal with applications and the only office for patents is located in Karachi. Why not open one in Lahore and Islamabad too?” he questions. While the Lahore and Islamabad centres do receive applications, the applications are forwarded to Karachi and a thorough examination is conducted here. According to IPO, 90% of the backlog exists due to objections raised in the examination that have yet to be addressed by the applicants.

Despite the backlog, however, IPO has elaborate plans for its future. “We are planning to launch one-window operations in Karachi to bring all three registries together in one place,” shares Meesaq Arif, director at IPO. “We also intend on launching a fully-automated website to introduce online filing and research. Our trademark journal is already online.” 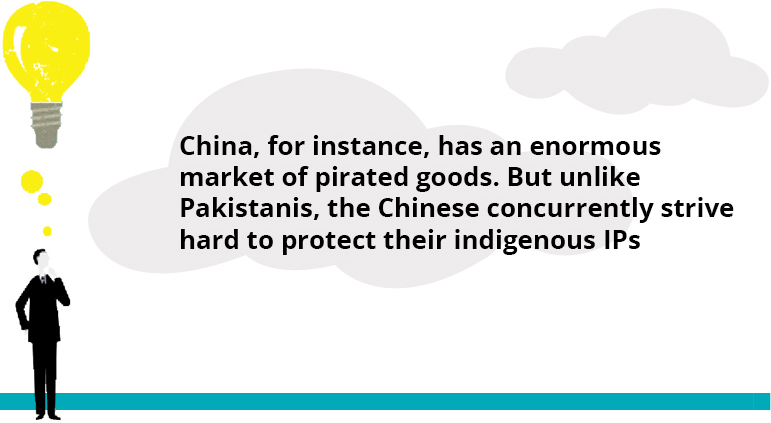 Apart from logistic issues that plague the process, seeking IP protection in Pakistan poses other problems that ought to be rectified. One of the largest impediments is that the enforcement of the laws is not undertaken by IPO but other agencies such as Customs and the Federal Investigation Agency (FIA). Therefore, their efforts usually reap mixed results. “As per the IPO act, we regulate enforcement through respective agencies,” says Arif. “We have to forward cases to them and they are bound to act upon it.”

Unfortunately, the law enforcement agencies have discrepancies of their own which hinder the overall aim of IPO. “There is a general lack of qualified personnel there. People simply don’t understand technical infringement,” explains Razzaq. “Due to these ill-equipped agencies, even the restraining orders issued by the courts are rendered useless.” It has taken over five years for him to sensitise courts to this matter, before which not even the judges realised how IP infringement could be a crime. 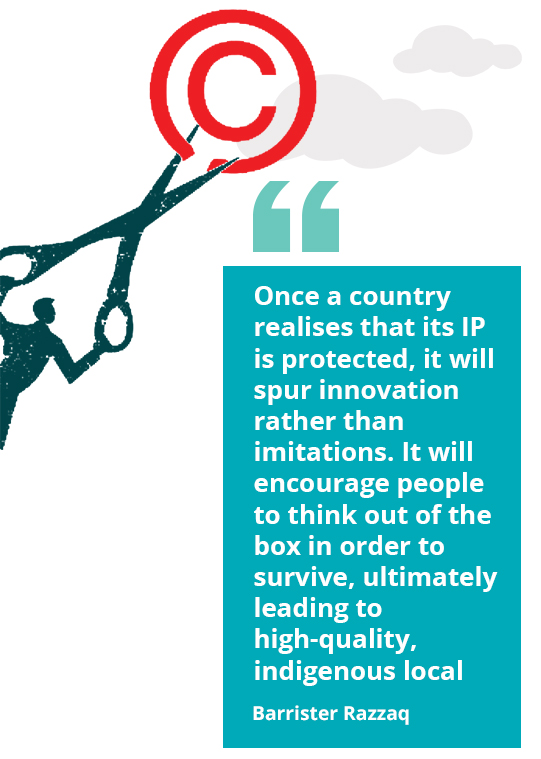 Considering this, one can argue that a top-to-bottom approach is necessary for the sound implementation of IP legislation. “We must strike a balance here. If there is hardcore implementation of laws, our entire manner of living will be affected dramatically,” suggests Shah. “For instance, look at how expensive original books and CDs are! Similarly, if we didn’t have generics (not counterfeits) for medicines, we would not be able to afford any.”

Due to the sky-rocketing number of IP crimes in Pakistan, IPO is currently negotiating for parallel imports, cheaper publishing rights and research and development support on international forums to help us create our own IP. But once again, lack of enforcement takes its toll as most international entities are reluctant to make ‘soft investments’ in the country. “Some investors from Azerbaijan and Munich did come to Pakistan but they left due to IP infringement,” laments Razzaq. “When they came, they got their patents registered. But when the time for enforcement arrived, nothing happened although the courts had issued restraining orders. Some of the cases are still pending in the high court. Tell me, who will invest in Pakistan this way?”

As the 26th largest economy in the world currently, Pakistan has immense potential for growth, if only foreign investors could rest assured that their IPs are protected. The IPO Act also states that special tribunals must be established along with specialised judges trained in the field and indeed, improvements seem to be underway. “The presiding officers have been appointed and the tribunals notified. They will soon be commencing complete operations,” adds Shah. “The tribunals await an official notification from the federal government which is expected to come any day now. Thereafter, all IP infringement cases from the district courts will also be transferred to them.” The tribunals will deal strictly with infringement cases only.

On the wings of change

Once we accept IP infringement as an act of criminality, we must answer another critical question: just how important is it? Why is it that Pakistani society seems to entertain such a dismissive and non-compliant attitude towards theft in general – not just IP infringement?

There are two schools of thought that can help comprehend the issue. To begin with is our economic reality wherein the majority of Pakistanis are unable to afford licensed items. “Would you buy an original book costing Rs5,000 when its illegal photocopy is available for Rs300 only?” asks Arif. “Counterfeit is purely black market where vendors profit from imitation. And that is a crime! However, piracy is always need-based and so are generics, although international cultures discourage it.”

The second reasoning attacks the problem at its root cause, ie the lack of innovation in the economy. “Pakistanis don’t believe in the concept of invention,” claims Razzaq. “If I don’t invent in anything, how would I understand the importance of protecting it?” According to his research, our neighbouring countries India and Bangladesh are currently benefitting from much stronger IP systems than ours. In the West, the concept of IP rights has been under scrutiny ever since the 19th century.

Nonetheless, it is extremely difficult to define a topic as convoluted as IP theft. In fact, it seems as though an amalgamation of the above-mentioned ideas has perpetuated a breakdown of the understanding of IP itself. “Just a handful of fresh graduates wish to start their own brands these days,” says Shah. “We, as people, are inclined towards seeking the easiest way out, such as consuming international brands.” Of course, such extravagant habits are prevalent across all developing nations. China, for instance, has an enormous market of pirated goods. But unlike Pakistanis, the Chinese concurrently strive hard to protect their indigenous IP.

Out of the total patents applied for in 2014, only 16% had been filed by locals. “The value of commercialisation of R&D in still misunderstood and apart from a few universities, most places share poor linkages with the industry,” elaborates Shah. “Investors don’t know the trick of commercialisation and remain concerned with work only.” Platforms such as the Office of Research, Innovation and Commercialisation (ORIC) – established by the Higher Education Commission (HEC) – are created to help students mingle within their respective fields. There is a dire need to raise awareness about IP rights and how inventors and investors can benefit from them greatly. “Once a country realises that its IP is protected, it will spur innovation rather than imitations. It will encourage people to think out of the box in order to survive, ultimately leading to high-quality, indigenous local products,” says barrister Razzaq.

But the landscape is changing, albeit slowly. Local corporations are gradually waking up to the importance of safeguarding their IPs. In fact, IP infringement formed a critical component of the government’s 2025 plan. Minister of Planning and Development, Ahsan Iqbal, recently met with IPO as well which indicated that the government is finally granting the issue the attention it deserves.

Ans Khurram is a freelance writer