You’re wide awake and chatting to your doctor while they remove a tumour in your brain from a hole cut into your skull. This isn’t a nightmare; it’s what’s called awake craniotomy, a breakthrough in the field of medicine.

During awake craniotomy, patients are kept in a conscious state in order to reduce the risk of losing vital functions such as movement and speech.

The alternative technique, although practiced and preferred across the globe, is relatively new to Pakistan, currently only performed at the Aga Khan University Hospital (AKUH).  Under Dr Syed Ather Enam’s supervision, awake craniotomy is a team effort of surgeons, general anaesthesiologists and their assistants.

The first awake craniotomy was performed by neurosurgeon Dr Enam and his team in December last year, and more than 10 such surgeries have taken place so far.

One of his patients is Hafsa Abdul Sattar, who was your average 25-year-old, fresh out of business school and enjoying her new job as an accountant. Then one day, she collapsed at work and was diagnosed with grade II astrocytoma, a tumour that grows at a relatively slow pace and is most commonly found in the cerebral hemispheres – the thinking part of the brain. After her diagnosis, her life revolved around meeting doctors during the day and reading up about the tumour on the internet at night.

A recommendation by a doctor led her to Dr Enam who suggested awake craniotomy to remove the tumour.

Speaking to The Express Tribune, Dr Enam said awake craniotomy allows surgeons to avoid ‘eloquent’ areas of the brain, parts that control speech, motor functions, and senses, while removing tumours. “When the patient is awake, you can stimulate the brain with electrodes and find out the function of the cells around the tumour. This way you can make sure if the area is safe to operate or not,” he explains.

During surgery, Hafsa was chatting and laughing as Dr Enam was exploring, cutting and extracting bits of cancerous tumour through a hole in her numb scalp.

To have your patient recite poetry and exchange jokes on the operating table enables surgeons to steer clear of vital brain tissues. But what if a part of the tumour is attached to an eloquent area? Dr Enam says in such cases that particular portion is left untouched during the surgery and later removed through radiation or chemotherapy.  “I had a patient whose tumour was near the cells controlling the speech function. Every time I would operate on his tumour, his speech would go down. I stopped there,” he says.

The decision to carry out awake craniotomy instead of a conventional one depends on the clinical evaluation of the patient. Dr Enam says the patient has to be strong enough to not back out in the middle of the surgery. “One of my patients who earlier agreed to go with awake craniotomy decided against it on the morning of the surgery and I agreed. If a patient begins to freak out while their skull is open and brain exposed, you have to put them into deep sleep, close the wound, put tubes in, put them on ventilator and then open their skull again. It is a hassle,” he explains. 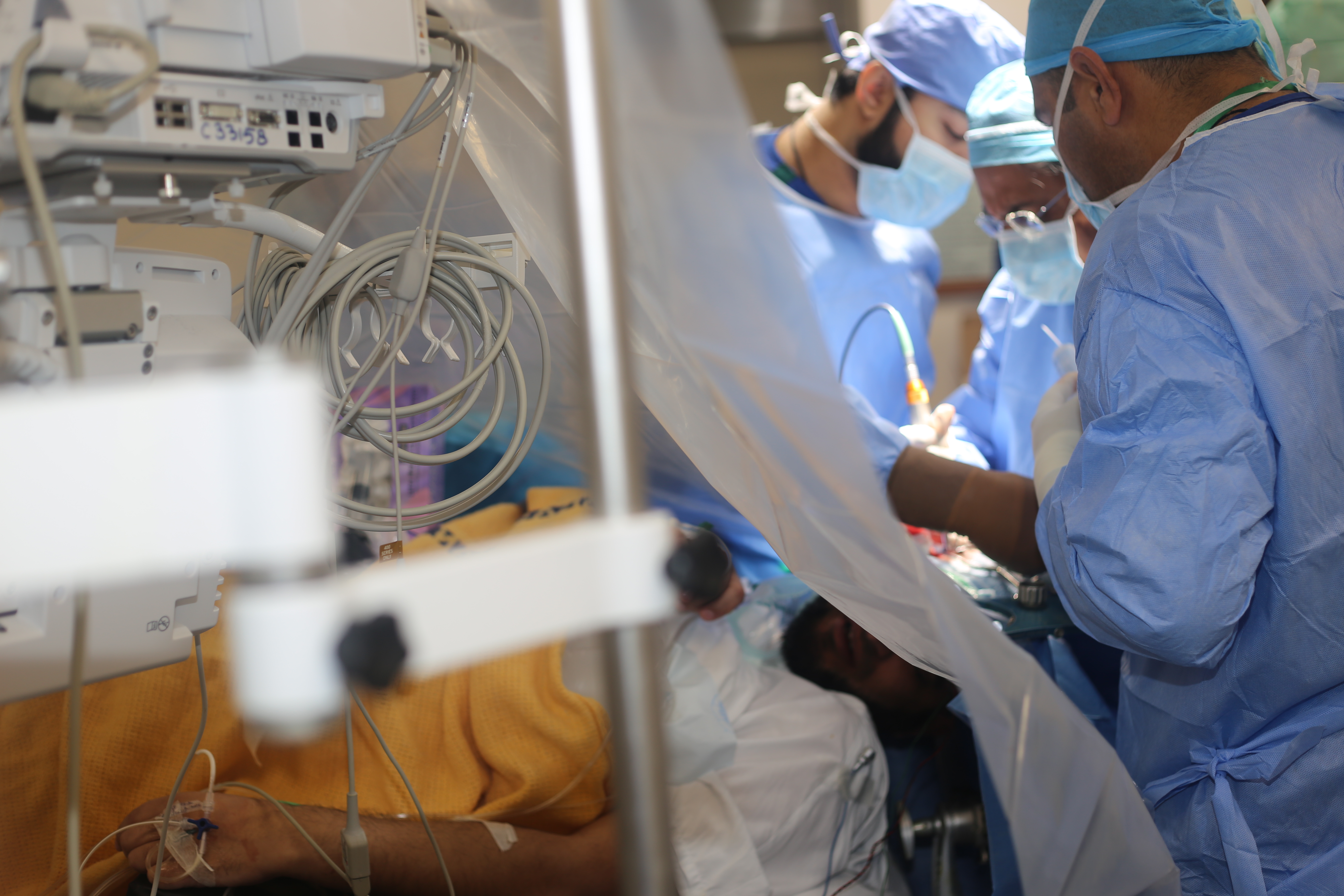 To have your patient recite poetry and exchange jokes on the operating table enables surgeons to steer clear of vital brain tissues. But what if a part of the tumour is attached to an eloquent area? Dr Enam says in such cases that particular portion is left untouched during the surgery and later removed through radiation or chemotherapy.

“The surgery doesn’t require a lot of skill but you have to be mentored extensively before performing it. I used to perform awake craniotomy when I was in the United States 12 years ago but had not performed it in Pakistan because the right team was not in place,” he recalls.

In 2015, when AKUH was in the process of importing neurorobotics technology – a combination of neuroscience, robotics, and artificial intelligence – a team of doctors visited the US and a chance to witness the unique surgery there. “When our doctors felt they could do it, we started performing the surgery in Pakistan,” Dr Enam says, stating he plans to train more surgeons and expand it all over the country.

Sharing what he observes before, during and after the surgery, Dr Enam says patients undergoing awake craniotomy are aware and confident. “They don’t feel like they are submitting to doctors and are in control,” he believes.

Hafsa, who recalls the entire surgery as a mere episode of fever, says she was guided by doctors throughout the process and took the decision to undergo awake craniotomy in consultation with her family. “When you are part of the decision-making process, the experience becomes a little easier,” she shares, adding that more than anyone, the patient needs to stay strong during challenging times.

The young accountant says she was discharged soon after the surgery and was back to work after a few weeks rest. “The surgery was a painless experience. I am happier and more confident than before. I feel my brain is sharper now as if the doctors added a few extra parts during the operation,” she quips.